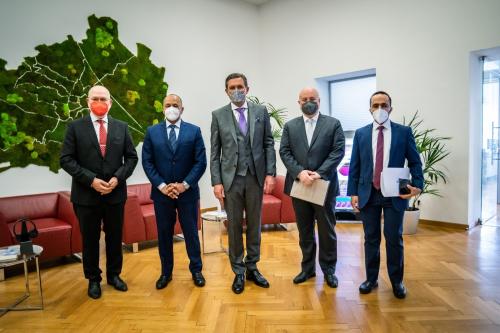 On 20 April 2021, H.E. Peter Hanke, Executive City Councillor of Finance, Business, Labour, International Affairs, and Vienna Public Utilities, received H.E. Ibrahim Almusharrakh, Ambassador of the United Arab Emirates to Austria, and AACC Secretary General Eng. Mouddar Khouja, for a courtesy visit at the premises of the Vienna City Hall. The visit was coordinated by AACC, following a kind request by Ambassador Almusharrakh, who also represented the Arab Ambassadors Council in Austria at this meeting, in his capacity as the Council’s current chairperson. The meeting was also attended by H.E. Eng. Omar Al-Rawi, Member of the Vienna City Council and Vice-President of the Austria-United Arab Emirates Association, and by Mr. Ahmad Alshehhi, First Secretary at the Embassy of the United Arab Emirates in Austria.

Mr. Hanke gave a warm welcome to his guests and emphasized the excellent relations between the City of Vienna and the United Arab Emirates, and the willingness to strengthen the cooperation with the UAE and the Arab region. He also expressed his personal affection and enthusiasm towards the region.

Tackling the potential and the enhancement of future cooperation between the City of Vienna and the United Arab Emirates, Ambassador Almusharrakh presented the UAE’s exceptional expertise and leading role in digitalization and smart city plans and highlighted the UAE’s achievement in the field of medical research and space exploration, namely its latest space mission to planet Mars. H.E. Ambassador Almusharrakh also presented the main indicators of the UAE’s energy plan for 2050 and shed light on renewable energy.

AACC Secretary General Khouja underlined the importance of consolidating the relations with the United Arab Emirates and other Arab countries, e.g. Saudi-Arabia and Egypt among others, mainly in the fields of renewable energy, energy-to-waste, solar energy, Hydrogen as energy carrier (solutions presented by Linde company), and waste recycling and management. Building upon the potential of mutual benefit, the Secretary General mentioned  Vienna’s pioneership and know-how in the field of passive housing and smart city concepts and the UAE’s outstanding role in developing and implementing new smart technologies. More particularly, SG Khouja referred to introducing the blockchain system to and integrating it within the local governmental administration of the Emirate of Dubai. In this context, the Secretary General suggested involving Wien Holding, the umbrella group for over 75 companies owned by the City of Vienna, in this cooperation.

In addition, SG Khouja presented a special proposal on a research fund for virology, sponsored by the family of Al-Jaber. HE Mohammed Bin Issa Al-Jaber is one of the most influential businessmen and investors of Arab origin in Austria, and a member of the Board of Directors of AACC.

City Councillor Hanke warmly welcomed the idea of sponsoring a research fund in Vienna and considered creating an appropriate tool to support this cooperation. Further details in this regard shall be coordinated soon.