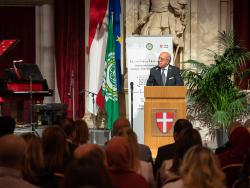 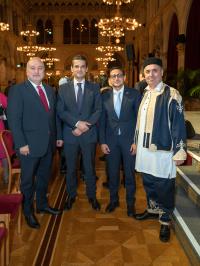 On 6 November 2021, AACC Secretary General Eng. Mouddar Khouja and board and staff members attended the second event of the “Arab-Austrian Cultural Season”, a joint initiative of the Austrian Federal Ministry for European and Foreign Affairs, the Mission of the League of Arab States and the City of Vienna. Under the motto “Cultural Partnerships and Historical Relations”, the evening celebrated the excellent cultural cooperation and long-standing ties between Austria and the Arab countries, featuring inspiring music and dance performances, craftwork exhibitions and local delicacies. Keynote speeches were delivered by H.E. Mr. Omar El-Rawi on behalf of the Mayor of Vienna H.E. Dr. Michael Ludwig, by H.E. Ambassador Peter Launsky-Tieffenthal, Secretary-General of the Austrian Federal Ministry for European and International Affairs, and by H.E. Dr. Salaheddine Abdelshafi, Ambassador of the State of Palestine and current Chairman of the Arab Ambassadors Council in Vienna.