REPORT: AACC coordinates a high-level meeting between the Mayor of Vienna and the Ambassador of Qatar to Austria 7 June 2021 - Vienna, Austria 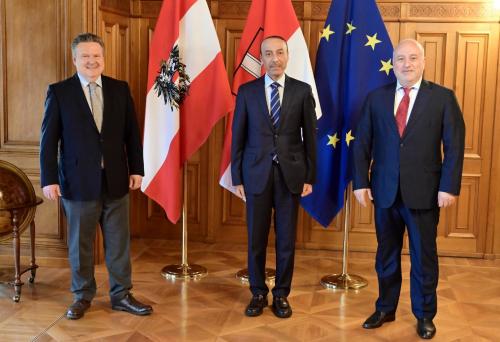 On 7 June 2021, the Mayor and Governor of Vienna H.E. Dr. Michael Ludwig received the Ambassador of the State of Qatar H.E. Sultan Salmeen Almansouri and the Secretary-General of the Austro-Arab Chamber of Commerce Eng. Mouddar Khouja for a courtesy visit at the premises of the Vienna City Hall. The meeting was coordinated by AACC with the kind support of H.E. DI Omar Al-Rawi, Member of the Viennese parliament and AACC Board Member.

Following a cordial welcome by H.E. Mayor Dr. Ludwig, Ambassador Almansouri expressed his sincere appreciation and gratitude to the Mayor and Governor of Vienna for having this meeting. He pointed out that the City of Vienna has taken exemplary measures in the fight against the COVID-19 pandemic compared to other cities. “The swift government’s strict implementation of regulations and precautionary measures and the Viennese population’s willingness to cooperate were indeed quite remarkable,” the Ambassador added. He then elaborated on Qatar’s intensive national vaccination strategy and stated that a very high percentage of the Qatari population has been already vaccinated.

Ambassador Almansouri also briefed Dr. Ludwig on the developments and progress in the State of Qatar in general, and on the preparations for the upcoming FIFA World Cup 2022 in Qatar in particular. In the framework of the good bilateral economic relations between Qatar and Austria, Ambassador Almansouri referred to the inspiring Al-Wakrah stadium as an example, built by the Vienna-based construction company Porr for the Word Cup 2022. Additionally, he emphasized his keen interest in a close cooperation and exchange of expertise with the City of Vienna in various fields, such as renewable energy, smart cities among others.

H.E. Dr. Ludwig thanked the Ambassador for commending the city’s measures against the pandemic, adding that the situation was unique and therefore was exceptionally challenging to administer and contain. The Mayor also warmly welcomed the idea of a strengthened cooperation and suggested to jointly receive delegations from Qatar and to show them examples of Vienna’s city development projects and smart sustainable city concepts in model areas such as Seestadt Aspern.

Ambassador Almansouri happily reciprocated this initiative by inviting the Mayor to Doha to introduce some city development projects and to attend the World Cup next year.

Referring to the excellent cooperation in the past, Secretary General Khouja offered full support in the implementation of the mentioned projects and delegation visits by the Austro-Arab Chamber of Commerce as the main point of reference for Austro-Arab relations. He also highlighted the importance of acquainting the Arab countries with Vienna’s success stories such as the city’s international ranking as the most livable city (by the international research institute Mercer in 2019, and for the 10th time in a row), and the city’s exceptional waste-to-energy model. 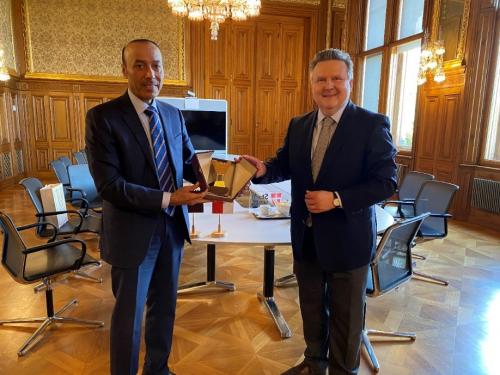 Dr. Margareta Grießler-Hermann from the Executive Office of the Mayor and Governor of Vienna, who provided valuable support in the preparation, and Mr. Ahmed Alhaj, Second Secretary at the Qatar Embassy in Austria were also present at the meeting.