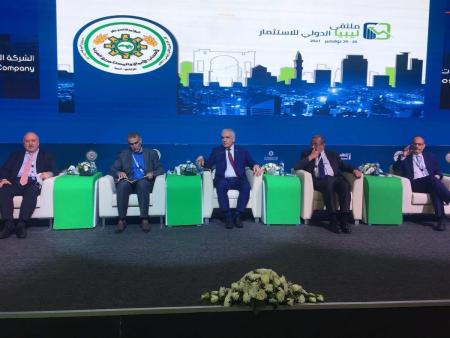 Under the patronage of the Council of Ministers of the Government of National Unity of the State of Libya, the 19th Conference of Arab Business Owners and Investors took place on 28-29 Nov. 2021, in the Libyan capital Tripoli. With the aim of attracting investments to Libya, this year’s conference was held under the slogan “Investing in Libya: Promising Opportunities for Development & Construction – Together for the revival of Investments in Libya”. The conference was jointly organised by the General Federation of Chambers of Commerce, Industry and Agriculture in Libya, the Union of Arab Chambers (UAC), the League of Arab States, the Arab Investment and Export Credit Guarantee Corporation, and Al-Iktissad Wal-Aamal Group.

The conference was marked by the attendance of more than 500 participants, including numerous high-level Libyan officials, Presidents and Secretaries-General of Arab and joint chambers of commerce, industry and agriculture, representatives of development banks and funds, as well as Arab and international investors, business owners and entrepreneurs. As such, AACC Secretary-General Mouddar Khouja headed a delegation of Austrian company owners and investors who attended the conference. 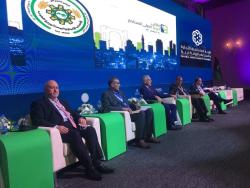 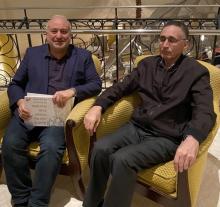 Left: SG Khouja as panelist in the conference / Right: Meeting with Minister of Economy HE Al-Hawaij

AACC Secretary-General Khouja also participated as a panelist in the 2nd session of the conference, which revolved around developing and sustaining Libya’s regional (Arab) and international relations. During this visit, Khouja met with the Libyan Deputy Prime H.E. Minister Abdul Hamid Dbeibeh, the Libyan Minister of Gas & Oil H.E. Mr. Mohamed Aoun, and the Libyan Minister of Economy H.E. Mr. Mohamed Al-Hawaij, among other prominent Libyan officials.