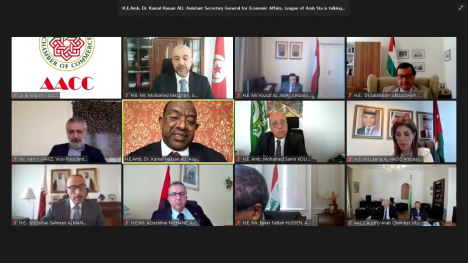 H.E. Mr. Mohamed Hamdy Elmolla, Ambassador of the Arab Republic of Egypt to Austria, commenced the country presentations, providing an overview of the Egyptian economy, the long-standing Austrian-Egyptian relations, and the existing and potential investment opportunities in Egypt. 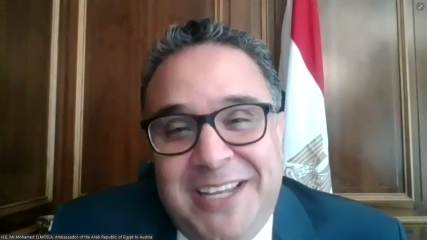 He shed light on Egypt’s recent macroeconomic and structural reforms which served to stabilize its economy and improve fiscal and external accounts, namely the flotation of the Egyptian Pound, issuing the VAT law, bolstering government revenues through the income tax law, reducing expenditures on wages and salaries and reforming the energy subsidy system. Despite the COVID-19 economic repercussions, Egypt’s economy continued to be marked by high growth, good fiscal accounts, sufficient foreign reserves and the continuation of mega projects, thanks to the fiscal monetary and energy sector reforms and the Egyptian government’s emergency measures and encouragement of foreign direct investments. Moreover, Egypt recently adopted a new investment law enabling investors to set up companies within a period as fast as 30 minutes.  Tourism, oil and gas exports and the Suez Canal are among the top sources generating income for Egypt, in addition to several emerging services, particularly in the field of FinTech startups. 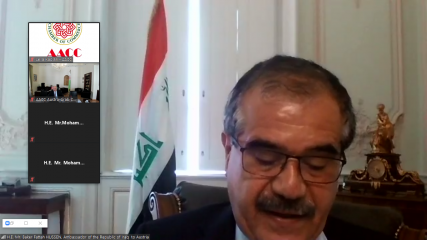 H.E. Mr. Baker Fattah H. Hussen, Ambassador of the Republic of Iraq to Austria, spoke about the simultaneous challenges and opportunities of the post-ISIS phase. As such, many investment opportunities are available in (re)construction, electricity, oil, infrastructure, waste water management, agriculture, and healthcare and education sectors. Motivating factors to invest in Iraq include its strategic and cost-effective trading and distribution location, its improving stability and security, its youthful workforce, in addition to investment incentives such as tax exemptions, guarantees and low corporate tax rates. Further details about investment sectors and opportunities could be found on the official website of the National Investment Commission: www.investpromo.gov.iq.

H.E. Ms. Leena Al Hadid, Ambassador of the Hashemite Kingdom of Jordan to Austria, highlighted the importance of tourism, water and renewable energy sectors for Jordan and the ample investment opportunities in the Kingdom in light of the lowered income taxes on profits. Jordan’s tourism is a fast-growing industry, especially considering the numerous and diverse historical, religious, natural and therapeutic elements and sites of the Kingdom. She emphasized Jordan’s focus on solar energy, presented Jordan’s National Water Strategy 2016-2025, and highly encouraged investments in the sectors of (waste) water, renewable energy, pharmaceuticals, health, ICT and organic produce. 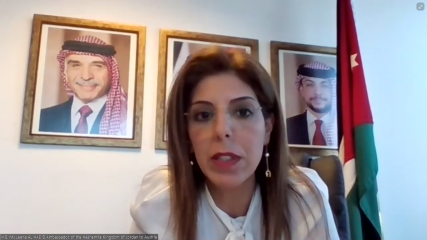 Ambassador Al Hadid also stressed that while the EU is the biggest foreign direct investor in Jordan, Jordan is the EU’s 63rd trade partner.

Current COVID-19 entry regulations to Jordan: online registration, a negative PCR test within the last 72 hours before entering the country, a health insurance covering COVID-19 treatment, and a 2nd negative PCR test upon arrival for the non-vaccinated.

H.E. Mr. Azzeddine Farhane, Ambassador of the Kingdom of Morocco to Austria, highlighted the four important pillars of the Moroccan economy: agriculture, tourism, industries and renewable energy. The Kingdom is characterized by a geostrategic location, a steady GDP growth, a low inflation rate and a sustainable public debt. He elaborated on the Kingdom’s steps towards heavier reliance on renewable energy sources, specifically solar, wind and hydropower, with the aim of achieving a 20% energy efficiency by 2030. 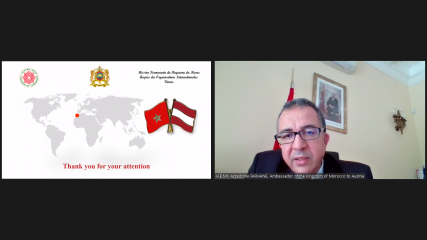 H.E. Mr. Yousuf Ahmed Al Jabri, Ambassador of the Sultanate of Oman to Austria, gave an economic outlook of the country, including the measures taken towards an economic recovery. He also shed light on Oman’s most important non-oil exports and presented the Oman Vision 2040 and its main performance indicators and targets for 2030 and 2040. Ambassador Al Jabri underlined a couple of target sectors for investment, namely tourism, logistics, fisheries, mining, education and manufacturing. Diversification, political and economic stability, good infrastructure, strategic location, capital and profit repatriation, a transparent legal system, trade and taxation agreements represent some of Oman’s biggest assets. 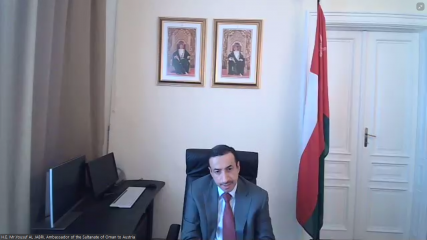 Current COVID-19 entry regulations to the Sultanate: international health insurance covering the cost of COVID-19 treatments and valid for one month, proof of 3 negative PCR tests, and a 7-day quarantine after arrival at the hotel ending with a negative test. Diplomats are exempted from the PCR tests and tracking wristband but not exempted from the mandatory 7-day-quarantine.

H.E. Dr. Salahaldin Abdalshafi, Ambassador of the State of Palestine to Austria, stressed his country’s tremendous efforts towards laying the ground for building a modern and successful economy, especially in light of the extraordinary circumstances the country has been grappling with for so long. Over the past few years, the tourism sector in Palestine has been growing steadily and contributing to the GDP, especially given Palestine’s natural beauty, rich and ancient history, and its significance on the world’s religious tourism map as the home to the three monotheistic and Abrahamic religions. 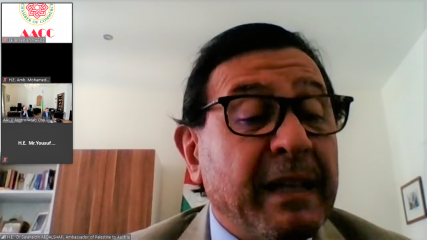 H.E. Mr. Sultan Salmeen Almansouri, Ambassador of the State of Qatar, elaborated on Qatar’s National Vision 2030, which seeks to turn Qatar into an advanced country by 2030, capable of sustaining its own development and providing a high standard of living for its population and future generations. The four pillars of this vision are human, social, economic and environmental development. In fact, Qatar already ranks among the countries with the highest GDP per capita worldwide. Qatar has also developed its administrative and legislative framework so as to be conducive to non-Qatari investment in priority sectors of the national economy, such as energy, tourism, IT, education, industry, health, sports, cultural services, agriculture, mining and the use of natural resources. 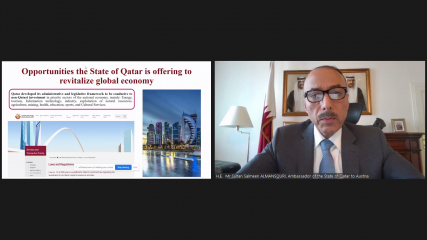 Ambassador Almansouri highly encouraged investing in stocks and shares in Qatar, which is made possible through Qatar Stock Exchange (QSE) and Qatar Investment Authority (QIA). Finally, he highlighted the main infrastructure plans and features of the first ever carbon-neutral FIFA World Cup taking place in Qatar in 2022. 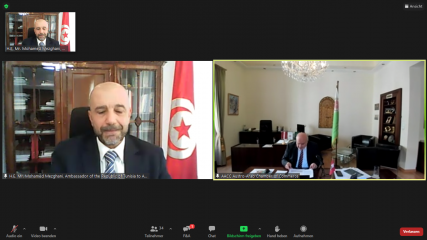 H.E. Mr. Ibrahim Almusharrakh, Ambassador of the United Arab Emirates, elaborated on the bilateral trade and investment relations between Austria and the UAE. Currently, more than 400 Austrian companies operate in the UAE. Austria’s investments in the UAE are mainly in the industrial and IT sectors, in addition to active engagement in petrochemicals and plastic mining. 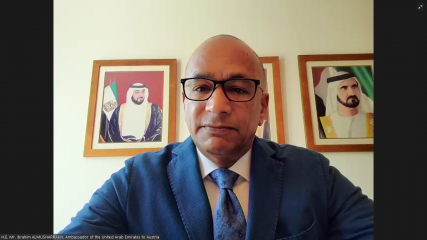 Ambassador Almusharrakh underlined a number of investment opportunities in the UAE, namely in the areas of wholesale and retail trade, real estate, financial services and insurance, manufacturing and mining. Ambassador Almusharrakh added that the UAE currently has 45 Free Trade Zones, with a 0% income tax and permitting a 100% foreign ownership. He also presented the UAE’s Energy Strategy launched in 2015, the National Strategy on Advanced Innovation launched in 2018, the 4th Industrial Revolution Strategy and the 10-year-industrial strategy “Operation 300 Billion”. H.E. also shed light on EXPO 2020, which will take place in Dubai from 1 October 2021 – 31 March 2022. Entry to the UAE currently requires a negative PCR test.