REPORT & VIDEO: Webinar “100% Foreign Ownership in the UAE: New Environment for Foreign Direct Investment on the Eve of Expo 2020” Webinar held on 14 September 2021

Webinar Report:
“100% Foreign Ownership in the UAE:
New Environment for Foreign Direct Investment on the Eve of Expo 2020”

Watch the video record on our AACC YouTube Channel: 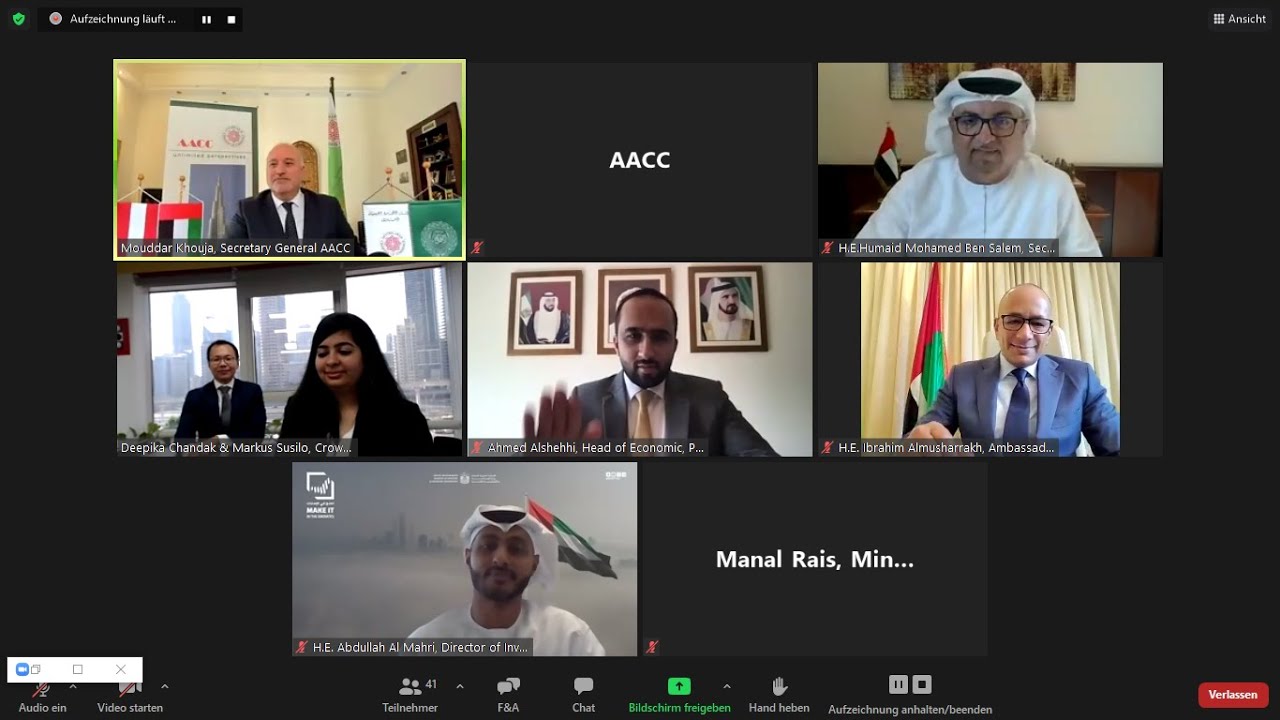 On the 14th of September, 2021, the webinar “100% Foreign Ownership in the UAE: New Environment for Foreign Direct Investment on the Eve of Expo 2020” took place, organised by the Austro-Arab Chamber of Commerce (AACC) in cooperation with the Embassy of the United Arab Emirates in Vienna and Crowe UAE. The webinar was moderated by AACC Secretary-General Mr. Mouddar Khouja and attended by over 80 participants from all over the world. 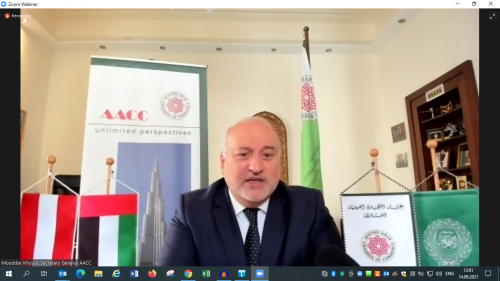 AACC Secretary-General Mr. Mouddar Khouja commenced the webinar by sharing some facts on the impressive developments and milestones of the United Arab Emirates over the past decades up until recently, namely the UAE Mars Mission and the Expo 2020 , the first world expo in the MENA and South Asia region. He also shed light on the close trade relations between Austria and the UAE, with the UAE being Austria’s top trade partner in the Arab region in 2020, and more than 400 Austrian companies operating in the country, such as OMV, Borealis, ILF Consulting Engineers. 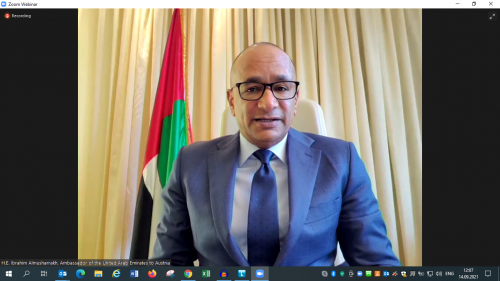 In his welcome notes, H.E. Mr. Ibrahim Almusharrakh, Ambassador of the United Arab Emirates to Austria, elaborated on the UAE’s strategy for the upcoming 50 years, which focuses tremendously on building the best and most dynamic economy in the world. Building on the UAE’s digital, technical, and scientific excellence, this strategy shall further solidify the UAE’s position as a hub for talent, companies and investments. Ambassador Almusharrakh also announced that the UAE has launched a new series of national strategic projects that will lay the foundation for a new era of growth, both domestically and internationally, and added that the UAE and Austria are working closely to enhance bilateral economic partnerships and promote mutual trade and investments. 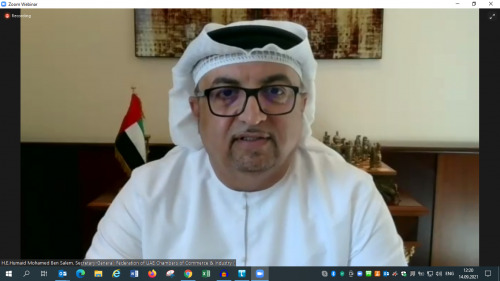 H.E. Mr. Humaid Mohamed Ben Salem, Secretary- General of the Federation of UAE Chambers of Commerce & Industry (FCCI), elaborated on Expo 2020 and the main factors behind the UAE ranking on top of the list of investment destinations, such as the cosmopolitan nature and cultural diversity of the country and it being a crucial hub for international business, with a multitude of air connections for passengers and freight. Mr. Ben Salem added that there is no tax on investors, corporates, or individuals and that over 40 free zones are currently operating across the country. 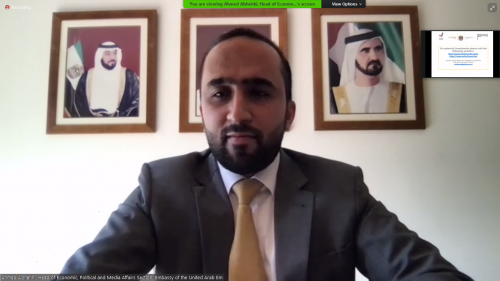 Mr. Ahmed Alshehhi, First Secretary and Head of Economic, Political and Media Affairs Section at the Embassy of the United Arab Emirates in Vienna, gave a concise overview of the UAE’s economic landscape, providing facts and insights to the UAE’s economy and business environment. He highlighted the recent amendment to the companies’ law enforced in June, which allows full ownership in all economic sectors except strategic activities. Other recently implemented regulations include a law on business bankruptcy and free zone regulatory frameworks. He added that the UAE has become one of the world’s most attractive investment hubs due to the steady increase in investment attractiveness and the country’s ability to attract substantial investments, thanks to the 100% ownership in free zones and within the UAE, the low inflation and custom tariffs as well as the effective visa system. Mr. Alshehhi then talked about the infrastructure and logistics in the UAE and emphasised the promising foreign investment sectors (such as renewable energy, block chain, cybersecurity, etc.). Finally, he gave an outlook on the UAE’s future in light of the launch of several strategies and projects as well as Expo 2020. 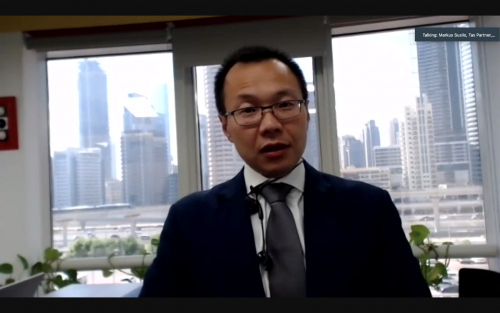 In his presentation, Mr. Markus Susilo, Tax Partner at Crowe UAE, focused on recent international tax updates, and more particularly on how tax transparency benefits FDI flow into the UAE. Mr. Susilo presented the important tax updates and changes between 2010 and 2021, which paved the way for certain changes in terms of double-tax treaties, namely between the UAE and Austria, with the target of creating more transparency in terms of information exchange. Mr. Susilo added that despite the stagnation in FDI inflows globally between 2018 and 2019, the UAE witnessed a substantial increase in FDI inflows for the same period, including from Austria, possibly caused by its tax regime and legal infrastructure. He concluded by highlighting the inclination towards new tax and transparency rules and the introduction of the “BEPS 2.0”, which is likely to naturally provoke the restructuring of investment to align with commercial activity of the MNE group. 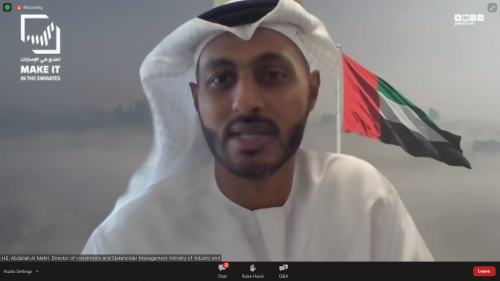 H.E. Mr. Abdullah Al Mahri, Director of Investments and Stakeholder Management at the UAE’s Ministry of Industry and Advanced Technology, provided useful insights into the National Industrial Strategy “Operation 300 BN” and the incentives available for investors. The strategy aims to increase the industrial value added from the current AED133bn to AED300bn in 2031, reduce reliance on imports for local products and diversify the breadth of competitive industries in the UAE. Currently around 33,000 industrial companies operate in the UAE, with 737k employees in the sector and a total contribution of 8.4% to the GDP. Mr. Al Mahri then spoke about the UAE’s competitive advantages, which include the ease of doing business, being a logistical hub, as well as the agility and responsiveness of the UAE’s government. He also clarified that three official entities - industry, advanced technology and ESMA - were merged together in July 2020 to form the new Ministry of Industry and Advanced Technology. Al Mahri also presented the campaign “Make it in the Emirates”, a call for action for investors, entrepreneurs and startups to establish themselves in the UAE. 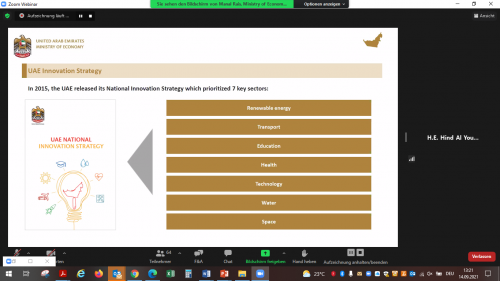 H.E. Ms. Hind Al Youha, Director of Investment and Talent Attraction at the UAE’s Ministry of Economy, gave an overview of the UAE’s investment ecosystem and diversification strategy. She also elaborated on the UAE’s National Innovation Strategy launched in 2015, which prioritised 7 key sectors: renewable energy, transport, education, health, technology, water, and space. Ms. Al Youha provided brief figures on the UAE’s business environment and detailed information on the UAE’s golden visa. She additionally underpinned the various incentives granted to foreign investors, including full ownership of all economic sectors (excluding strategic impact activities), freedom of settling disputes, the elimination of the need for a local service agent and of minimum capital requirement for limited liability companies. 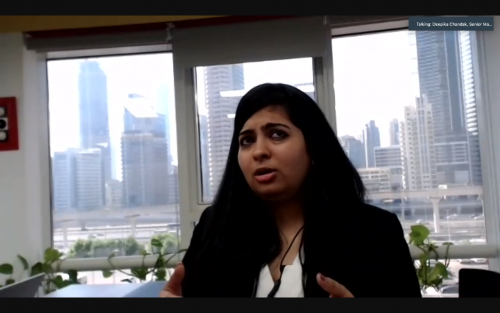 Lastly, Ms. Deepika Chandak, Senior Manager at Crowe UAE, presented a timeline of the corporate laws in the UAE from 1984 and updates on the implementation of the UAE’s 100% foreign ownership law. With the enactment of CCL in 2021, both prerequisites of having a local service agent (LSA) for branches of foreign company and a majority contribution from a UAE national have been eliminated. Moreover, each Emirate now has its own approved list and administrative setup, and requirements and foreign nationals can explore the possibility of 100% ownership in UAE companies. Before applying for setting up a company in the UAE, it is extremely important to consider the following factors: the industry and nature of the activities that the company intends to carry out, the value of FDI in the UAE and the future business plan (3 years). Ms. Chandak finally clarified that after all, everything is subject to the approval of the Emirati authorities, and that activities with strategic impact on the UAE are excluded from the new regulation.

To watch the video-record of the webinar, please visit the AACC YouTube Channel at the following link: https://youtu.be/MVBJgGGHn20