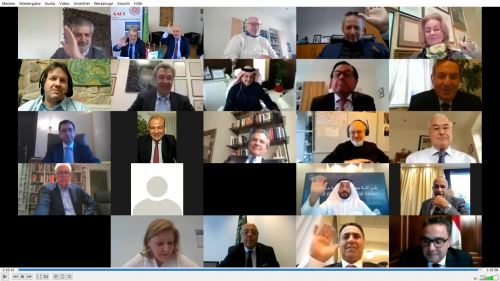 On 15 December 2020, the Austro-Arab Chamber of Commerce (AACC) held its AACC’s 29th Session of the General Assembly (GA) together with the 30th Meeting of the Board of Directors (BoD) via Zoom, with a total of 54 participants, including the Chamber’s Board and regular members and their excellencies the Arab ambassadors in Vienna.

AACC President Senator Dr. Richard Schenz commenced the meeting, welcoming all participants and providing a brief overview of the current economic situation in Austria and the trade activity with Arab countries in light of COVID-19. 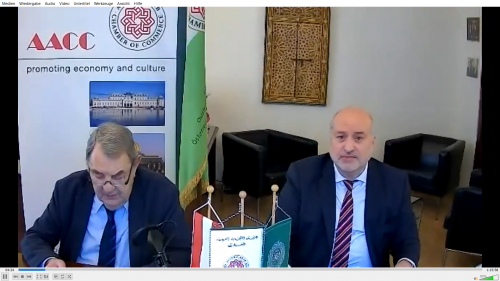 AACC Founder and Arab President Kommerzialrat Nabil Kuzbari expressed his appreciation to all participants, members and the team for coordinating and joining this year’s meeting for the first time as an online virtual meeting, due to the given circumstances caused by the COVID-19 pandemic.

H.E. Ambassador Leena Al-Hadid, Ambassador of the Hashemite Kingdom of Jordan delivered remarks in her capacity as Chair of the Arab Ambassadors’ Council in Vienna, whereby she highlighted AACC’s role in and contribution to promoting social and business partnerships between Austria and the Arab countries and commended AACC’s efforts and active engagement in supporting aid initiatives for reconstruction in Lebanon following the massive explosion that hit Beirut port in August 2020.

H.E. Ambassador Kamal Hassan Ali, Undersecretary General of the League of Arab States for Economic Affairs also shed light on the indispensable role that AACC has been playing for the last decades, supporting various stakeholders and fostering and strengthening economic, scientific and other forms of cooperation between Austrian and the Arab countries.

In addition, H.E. Ambassador Mohammed Samir Koubaa, the Head of Mission of the League of Arab States in Vienna, expressed his gratitude and appreciation for the excellent cooperation with the chamber.

And lastly, H.E. Dr. Khaled Hanafy, Secretary General of the Union of Arab Chambers, elaborated on the challenges faced by the Union and the chambers to sustain the chambers in light of the current pandemic and praised AACC’s ability to manage and make it through these impeding circumstances.

Moreover, AACC Secretary General Eng. Mouddar Khouja reported on the Chamber’s current status and its main activities and publications over the past year, in addition to the latest indices and statistics concerning international stocks and bilateral trade volume between Austria and the Arab countries

During the above-mentioned meeting, Mrs. Maria Mittermair, Senior Vice President for International & Governmental Relations at OMV, was elected the new AACC Vice President from the Austrian side, and new Board members were elected from both the Austrian and Arab sides.

At the end of the meeting, a questions and answers session took place and additional remarks were put forth by AACC board member H.E. Mr. Abdullah Al-Oweis from Sharjah and others.

Board of Directors 2020 (after election)