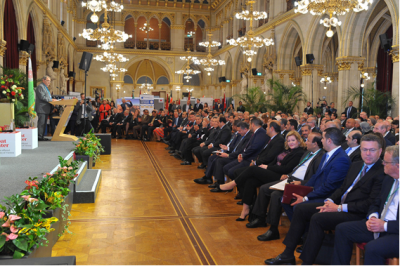 The 11th Arab-Austrian Economic Forum and Exhibition and AACC's 30th Anniversary celebration, which took place on 23/10/2019 and were attended by around 650 participants, including many high-level guests and speakers, prove once again the keen interest in strengthening the Austro-Arab partnerships in all economic and scientific sectors and on all aspects. 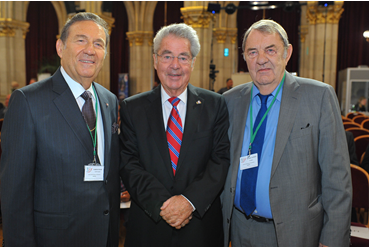 Undoubtedly, the attendance and active participation of numerous high-ranking officials, ambassadors, representatives of policy-making organs and prominent companies and institutions from various sectors, including but not limited to business, economy, trade, energy, construction, science, technology, medicine, politics, and from Austria and many Arab countries (Libya, Kuwait, Iraq, KSA, Egypt, UAE, Qatar, etc.) reflect the paramount importance of this Forum.

H.E. Ambassador Omar Amer Youssef, Ambassador of the Arab Republic of Egypt to Austria and Chair of the Arab Ambassadors Council in Vienna, opened the exhibition, expressing his pleasure and pride to have all Arab embassies in Austria participating and displaying their culture, art, and traditions. 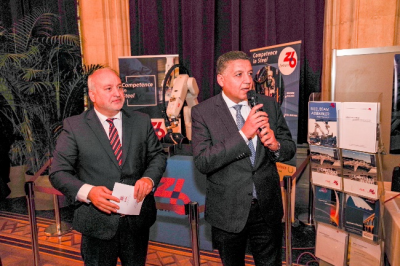 H.E. Senator Dr. Richard Schenz, President of AACC, commenced the 11th Arab-Austrian Economic Forum by delivering his welcome remarks and referred to the vast investment opportunities that the Arab Region has to offer and the multi-sectoral Austrian expertise that has rendered Austria a leading global example, while highlighting the indispensable role of AACC in building bridges and fostering partnerships between Austria and the Arab countries in this regard. 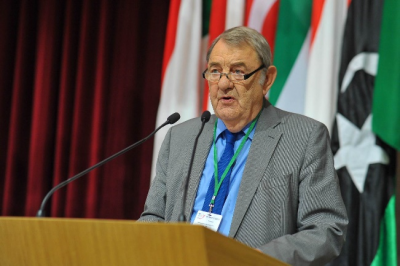 H.E. Mr. Mohammed Abdo Saeed, President of the Union of Arab Chambers, expressed his pride in the development of the Austro-Arab relations throughout the recent decades, reiterated the real Arab determination to play a significant role in the 4th industrial revolution and 2nd digital revolution, and called for strategic partnerships between Arab countries and Austria. 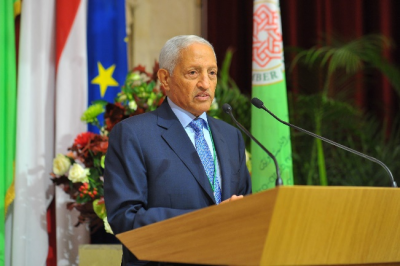 H.E. Dr. Heinz Fischer, Former Federal President of the Republic of Austria and Co-Chair Ban Ki-Moon Centre for Global Citizens stressed the importance of “stable and trustworthy relations” between the Arab region and Austria and highlighted the significance of the latter as a hub for international organizations and “platform for political and economic dialogue between Europe and the Arab world”. 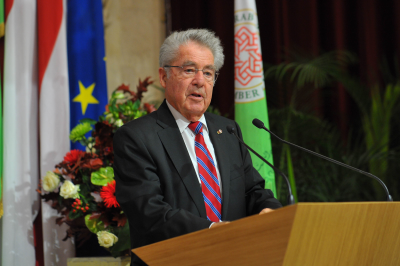 Vice-President of the Presidential Council of the Government of National Accordance of Libya H.E. Dr. Ahmad Maiteeq praised the cooperation between Austria and Libya, as the latter’s trade volume with Austria came in first place (2018/2019) among Arab countries, and invited Austrian companies to invest more in Libya. 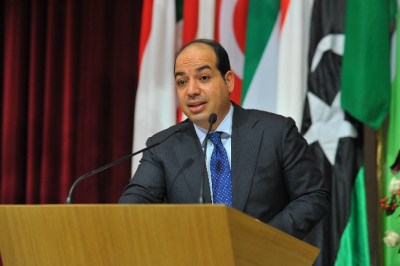 H.E. Ambassador Kamal Hassan Ali, Assistant Secretary General for Economic Affairs of the  League of Arab States, highlighted the significance of AACC among the joint chambers and the crucial role it plays as a spectacular platform serving to strengthen the Austro-Arab relations, to think collectively of the challenges facing our world and to share experiences and best practices in various fields. 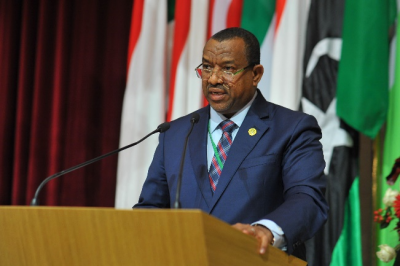 H.E. Ambassador Andreas Riecken, Vice-Minister/Director of EU & Multilateral Affairs, Federal Ministry for Europe, Integration and Foreign Affairs of the Republic of Austria, described AACC as “the catalyst for commercial relations between Austria and the Arab countries”, contributing to a remarkable development in trade relations since its establishment in 1989 but also to scientific and cultural cooperation, mutual understanding and confidence building between both sides. 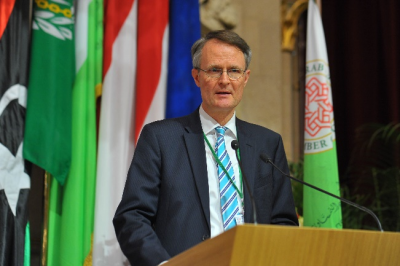 H.E. Ambassador Omar Amer Youssef emphasized the importance of highlighting and encouraging mutual investment opportunities and strengthening exchanged visits between Austria and the Arab region on an official level and in terms of private and business partnerships. He also called for the need to work on establishing more equilibrium in imports and exports between Austria and each of the Arab countries. 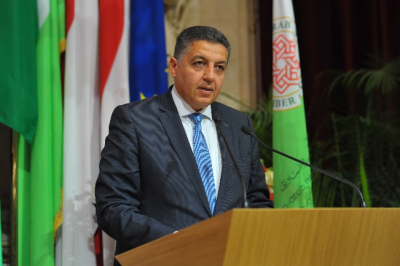 AACC SG Dipl. Ing. Mouddar Khouja stated that despite the turbulence that the Arab region has been witnessing, there are plenty of possibilities to interact, economically and culturally, and many areas to benefit from Austrian expertise, citing Burgenland’s impressive multi-leveled transformation, particularly in the context of becoming an energy producing and exporting centre. 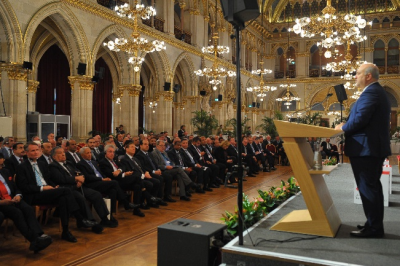 The Official Opening was moderated by Mrs. Leila Kaplan from AACC.

Following the opening remarks, UAC SG Dr. Khaled Hanafy introduced and chaired the High-level Segment, which sought to explore the potential and future of economic cooperation between companies from both the Austrian and Arab side, as well as the challenges, recommendations, and successful stories of such partnerships. With the rise in population and urbanization worldwide, the rapid advancement in technology and the increasing demands of societies, a shift in the dynamics of business and economy sectors, long-term strategic partnerships and trust relationships with counterparts, and real action towards climate protection and energy efficiency have become necessary to cope and keep up with all these changes and to cater to societies’ needs more effectively.  With Austria as a pioneer in implementing environment-friendly technologies and sustainable infrastructural planning, new bridges could be extended to expand economic ties and strengthen the cooperation between Austria and the Arab countries, thus creating new investment opportunities in many sectors. This is highly demonstrable through the Burgenland model, Vienna’s efficient and affordable Wiener Linien’s public transportation system (365 Euros per year) and OMV’s re-oil technology, implementation of CSR projects, and promoting awareness of best practices within the oil and gas industry. 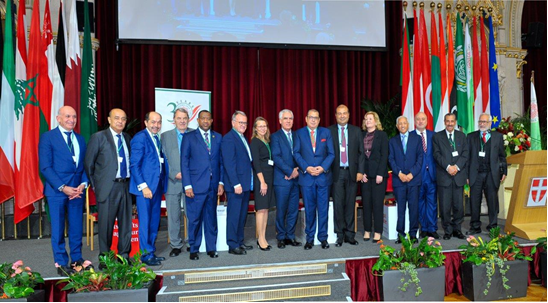 The official opening remarks and the high-level segment were followed by two thematic sessions. Session I revolved around energy and industrialization and was moderated by H.E. Mr. Herbert Scheibner, former Federal Minister of Defense of the Republic of Austria, whereas Session II discussed topics related to water & infrastructure and was moderated by Mag. Nella Hengstler, Regional Manager Africa Middle East, Austrian Federal Economic Chamber. The presentations delivered were very interesting and thought-provoking, attracting a very enthusiastic audience and triggering vigorous discussions. 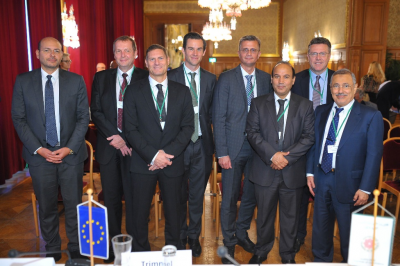 Both sessions paved the way for potential Austro-Arab partnerships and brought to light the vast investment prospects and expanding development projects in the MENA region, namely in Saudi Arabia (NESMA) and Egypt (SCZone). 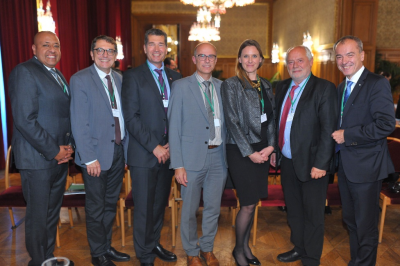 The sessions also provided and overview of pioneering Austrian innovations in fields like Wind power and Photovoltaic systems and technologies such as Sin Beam, KITEO Concept, Sanlight Solutions and, in addition to water projects in the Middle East, namely ILF’s projects in the fields of desalination, water transmission, wastewater treatment and masterplans.

Following the sessions, a B2B/Career Networking meeting was held, bringing together companies and institutions from various sectors, as well as engineers and job seekers.

In the evening, AACC held its annual Gala Dinner at the Wiener Rathaus. Unlike previous years, there were several special occasions to celebrate at this year’s Gala Dinner, as 2019 marked the 30th anniversary of the establishment of AACC and the 10th year for Secretary General Dipl.-Ing. Mr. Mouddar Khouja in office. More remarkably, AACC is proud to announce that Mr. Khouja was awarded the "Decoration of Merit in Gold of the Province of Vienna", in recognition of his tremendous dedication and devotement to the province of Vienna through his personal initiatives and in his professional capacity as Secretary General of AACC. This prestigious award was handed at AACC’s 30th Anniversary Gala Dinner by Dr. Kurt Stürzenbecher, Chairman of the City Council Committee for Finance, Economy, Digitalization & International Affairs, member of the Provincial Parliament, and member of the Vienna City Council, on behalf of Lord Mayor of Vienna Dr. Michael Ludwig. 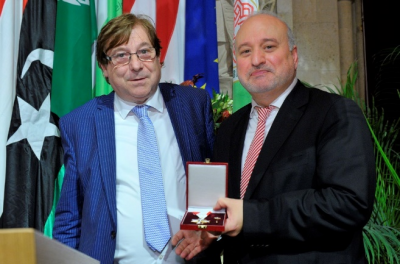 Furthermore, the AACC had the honour of having Dr. Christoph Leitl, President of Eurochambers and Chairman of the Global Chamber, to address the audience at the Gala Dinner, whereby he commended AACC’s achievements over the last 3 decades and the vital rule it has been playing in building bridges, long-lasting ties and friendships, thus creating mutual trust and benefit between Austria and the Arab countries. He also spoke about the core role that business people have to play in creating possibilities, education, skills and life perspectives for the youth in order to achieve progress, stability, peace and prosperity across the globe. 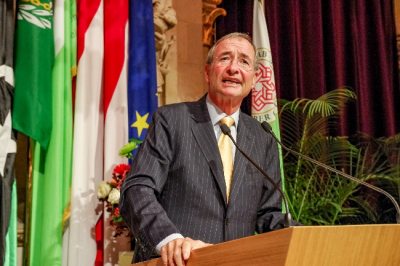 Mesmerizing performances by the renowned violin artist Lidia Baich and the Vienna ensemble enchanted the guests throughout the Gala Dinner which was moderated by Mrs. Leila Kaplan from AACC. 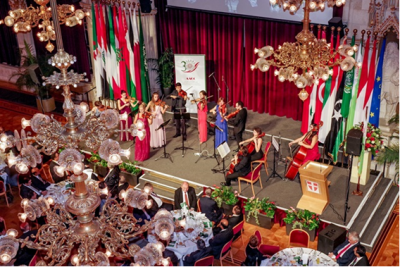 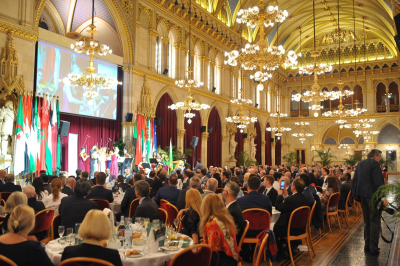