Report: Visit of the UAC delegation to EUROCHAMBRES office in Vienna 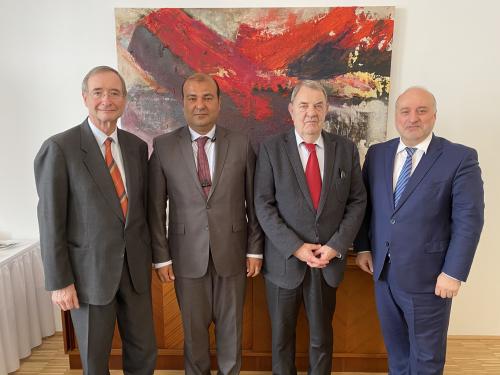 On February 12th 2020, the President of the Association of European Chambers of Commerce & Industry (EUROCHAMBRES) Dr. Christoph Leitl received a delegation from the Union of Arab Chambers (UAC) at his office in Vienna, represented by UAC Secretary General Dr. Khaled Hanafy, the President of AACC Senator Dr. Richard Schenz, and AACC Secretary General Eng. Mouddar Khouja.

During the meeting, an overview of the respective institutions and their activities were presented, and mutual economic, cultural and scientific cooperation prospects were outlined. It was agreed to organise several bilateral events and to issue joint economic reports and publications. Dr. Hanafy expressed UAC’s interest in a bilateral collaboration in the field of digitalisation based on solid Information and Communications Technology (ICT) infrastructure; logistics and transportation; and startups, SMEs & entrepreneurships; whereas Dr. Leitl referred to potential cooperation in digitalization, sustainability, SMEs & entrepreneurships, in addition to education and training, while highlighting the importance of input from the private sector in this regard.

The representatives of both institutions discussed the possibility of the chambers convening joint economic conferences and meetings throughout this year, targeted at the private sector and yielding results and recommendations that are to be presented afterwards to high-level policy makers at a Euro-Arab Summit. Another form of collaboration that was proposed during the meeting is organizing a UAC-EUROCHAMBRES event during the first quarter of 2021 within the scope of Expo2020 in Dubai. Such events could become institutionalised eventually, taking place on an annual basis and in an alternating manner between Europe and the Arab Region.

With the aim of consolidating this cooperation among Arab, European and Joint Chambers, it has been further agreed to draft a Memorandum of Understanding, to be signed between UAC and EUROCHAMBRES at the headquarters of the latter in Brussels.