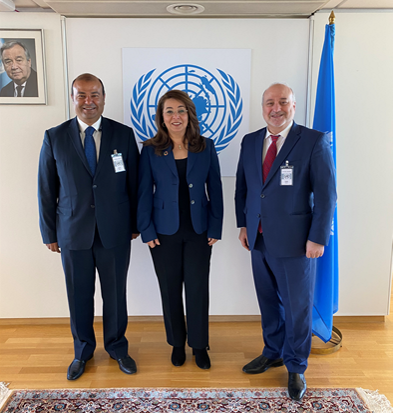 During the meeting, Dr. Waly was briefed on the role of Arab and Joint chambers and their scope of work, with a focus on AACC and its various activities. Several means of collaboration and future UNODC-AACC partnerships were outlined. Dr. Waly expressed UNODC’s interest in strengthening the office’s cooperation with AACC, particularly in terms of holding joint events and establishing a connection between UNODC and the Austrian society and business community. AACC Secretary General Eng. Mouddar Khouja proposed arranging common activities, trainings and seminars aimed at countering corruption, considering the repercussions of this issue on the economic sector caused by the dramatic increase in prices of products and materials for end-use. The Secretary General also informed Dr. Waly that AACC organized an “Expert Round Table on the Reconstruction of the City of Mosul/Iraq” in February 2019, in collaboration with UNODC among other organisations.