REPORT:
Expert’s Round Table on the Reconstruction of the City of Mosul 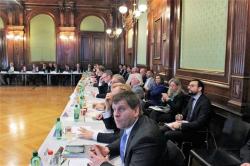 On Wednesday, 27 February 2019, the Austro-Arab Chamber of Commerce, in cooperation with the Embassy of the Republic of Iraq in Austria and the Austrian Society of Engineers and Architects invited to an exclusive “Expert’s Round Table on the Reconstruction of the City of Mosul” in Austria’s capital Vienna.

More than 70 high-ranking participants from the public and private sector from Iraq, Austria, and the international context followed the invitation to Vienna to discuss the reconstruction of areas and regions in Iraq and to find solutions in the form of presentations and an open dialogue. 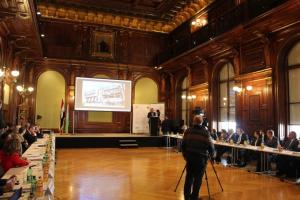 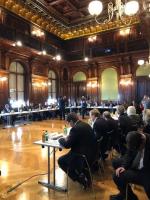 The President of the Austro-Arab Chamber of Commerce, H.E. Senator Dr. Richard Schenz, opened the meeting with his welcome remarks and recognized the importance of such a round table, and the desired objectives by taking advantage of the available expertise and capabilities.

The Secretary General of the Austro-Arab Chamber of Commerce, Eng. Mouddar Khouja, who was also the moderator of meeting, said that the idea for this round came after a series of international meetings, meetings and conferences on the Iraqi issue. The presence of representatives from both, the public and private sectors from different continents reflects the international attention and importance of this topic, he added.

In his opening statement, the Chargé d’affaires of the Embassy of the Republic of Iraq H.E. Dr. Usama Al-Nashy highlighted the major damage to the city of Mosul caused by the terrorist organizations who were in control of the area until its recent liberation. 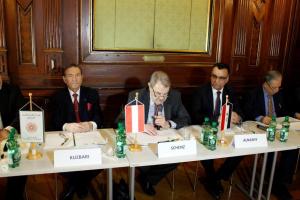 Being the host and house lord of the event, Em.O.Univ.-Prof. Dipl.-Ing. Dr.techn. Dr.h.c.mult. Heinz Brandl, the President of the Austrian Society of Engineers and Architects, also gave a warm welcome to the high-level guests. Prof. Brandl, an internationally renowned and highly decorated scientist and pioneer in the field of bridges, tunnels and dams, spoke about the role played by engineers in the reconstruction of the city of Vienna after the two World Wars.

In his address, the President of the Fund for the Reconstruction of Areas Affected by Terrorist Operations in Iraq (REFAATO), H.E. Dr. Moustafa al-Hiti acknowledged again the importance of the round table and the high level of participation. He gave an overview about the most prominent projects and urban development plans currently underway, and pointed out that the biggest challenges the city of Mosul was facing today was related to mine clearance, especially in the area of the old city center. 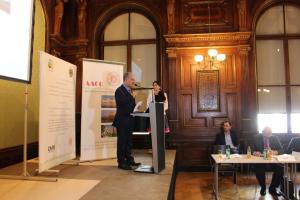 H.E. Mr. Kamran Ali Hassan, Vice-Minister of Environment of the Republic of Iraq, stressed on the environmental damage in large areas of Mosul, such as the pollution caused by the planting of improvised explosive devices throughout the old city, and he also mentioned the importance of demining plans for the affected areas. 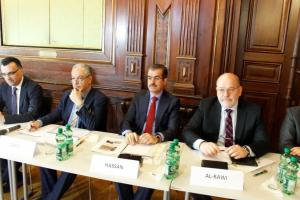 Nominated in representation of the Secretary General of the Federal Austrian Ministry for Europe, Integration and Foreign Affairs, the Deputy Director for Near and Middle East, H.E. Mag. Andreas Rendl, addressed the participants with his statement on political, economical and historical aspects of Iraq, and stressed on its multi-facetted society that had to be preserved.

In his turn, the member of the European Parliament and Vice-President of the Social Democrats H.E. Prof. Dr. Joseph Weidenholzer, considered the roundtable meeting as a "historic moment" for reconstruction of Iraq, and stressed on the great potential and diversity of its human and cultural resources. He proposed partnerships between the city of Mosul and European cities to promote cultural understanding and called on other EU representatives to support the reconstruction of Iraq not only by words. 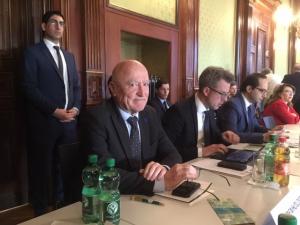 Speaking in representation of the Mayor the City of Vienna, H.E. Dipl.-Ing. Omar Al-Rawi, Member of the Vienna City Council stressed on the possibility of taking advantage of the Austrian and Viennese expertise for topics of reconstruction, by pointing out that Vienna also had witnessed difficult periods of reconstruction after the two World Wars in the past.

Exchange of experience between the cities of Mosul and Vienna, as the latter was elected “best city in the world” in terms of standard of living for several years, was suggested by Ing. Mag. Rudolf Zunke, Strategic planner in the City of Vienna’s Chief Executive Office for Urban Planning, Development and Construction, in his statement.

In his expert presentation, Eng. Siood Al-Omari, Consultant Architect and Envoy of the President of Committee of Rebuilding Mosul stressed the need to preserve the features of Mosul and especially its old city center in the reconstruction process, as Mosul, with its very specific historic “DNA”, was a significant figure of Iraqi history. He concluded that effective reconstruction methodology must also adopt the concepts and perspective of a sustainable development agenda, in order to guarantee peace, progress and stability.

Mr. Hugo De Vries, Stabilization Specialist and West Mosul Coordinator from UNDP Iraq gave an overview of key achievements of the Funding Facility for Immediate Stabilization (FFIS) programme. The projects covered infrastructure, education, justice, municipalities etc. and were by 95% implemented by local Iraqi contractors. Mr. De Vries also introduced the “Main National Platform for Construction and Development” / Recovery, Reconstruction and Resilience (‘RRR’) data platform installed by the Ministry of Planning and UN Habitat. He referred to the huge potential of local Iraqi partners to implement future projects, and at the same asked for the support of international partners whether from the UN or the private sector, for the effective reconstruction of the region.

Mr. Stavros Papastavrou, Industrial Development Officer, Agro-Industries Technology Division, UNIDO, delivered his statement on behalf of UNIDO Director General H.E. Mr. LI Yong, with focus on industrial and technological aspects of cooperation for the reconstruction process.
In his contribution, Mr. Zouhair Racheha, Counter-Terrorism Specialist from UN Office on Drugs and Crime, informed that Iraq has been one of the greatest victims of terrorist activities, and therefore UNODC multiplied its efforts in providing counter-terrorism legal technical assistance and capacity building assistance to its government.

H.E. Mr. Mansour Attia, Member of the Iraqi parliament, also identified the need for the reinstallation and training of public security forces as one of the key indicators for the stability of the city of Mosul. He referred as well to the city’s importance for Iraq’s stability and history.
Representing the Austrian Federal Economic Chamber in this exclusive event, Mag. Nella Hengstler, Regional Manager for Africa and Middle East, shared her experiences and referred to the services provided by chamber to support business activities from Austrian companies in the Middle East region.

Among the high-level architects contributing in the roundtable were Prof. Manfred Wehdorn, an internationally highly renowned architect and expert in the field of restauration of historical buildings and urban planning, who presented his expert approach on how to rebuild a city by considering many different aspects and the city in its entirety.

Professor Ghada Al-Slik, professor of theory, philosophy and preservation of architecture at the University of Baghdad, gave a detailed account of the architectural, urban and cultural values of the historical traditional old city of Mosul and its rehabilitation and regeneration.

“Think in big scales, and act in diverse small steps in order to achieve success” was one of the key messages from Architect Eng. Talik Chalabi, Managing Director at Chalabi Architekten & Partner ZT GmbH, who urged to engage small and medium local enterprises from Iraq for projects of reconstruction. He also stressed on the importance to consider and incorporate environmental aspects and structures of the region into the reconstruction process.

Ms. Nadia Tobia from Tobia Architects, based in Toronto, Canada, who presented her works in the field of architecture with focus on hospitals and clinics.

Among the other participants were representatives from companies such as Strabag, GHS, VA Intertrading, VOITH, WVP, together with media, institutions and others.

The Round Table meeting generated an excellent feedback and response from both, the participants and the media. The two-day program of the high-level Iraqi delegation also included an official welcome of honour at the Vienna City Council, and a personal meeting with the President of the City Council Mag. Thomas Reindl. 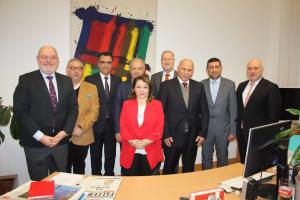 They were also invited for a visit and tour through to the King Abdullah b. Abdulaziz International Centre for Interreligious & Intercultural Dialogue (KAICIID), where they were welcomed by the Secretary General H.E. Mr. Faisal Bin Muaammar and members of the administrative board. The discussions focused on the center's role in peacemaking and its various projects in Iraq to spread an atmosphere of tolerance and pluralism in the country. The debate also revolved around the situation in Iraq in recent years and the possibilities of support in the fields of education in the early grades, to instill a culture of understanding and pluralism in the country’s development. 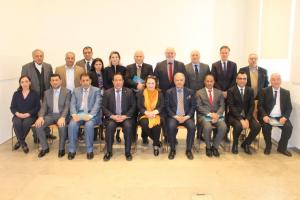 The delegation also paid site visits to the Seestadt Aspern, one of Europe's largest urban development projects; and to the waste incineration plant “Spittelau”. 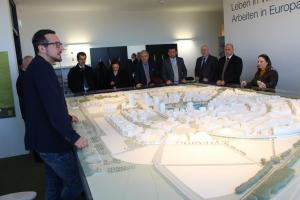 They concluded their program with a visit to Meixner Vermessungs ZT GmbH, an Austrian pioneer company specialised in future technologies for land surveying, laser scanning, photogrammetry, cultural heritage and 3D city models. The company’s General Manager Prof. Harald Meixner gave a detailed explanation of the services provided by his company, and introduced the company’s latest technological equipment, including the famous technology known as 3D.