From 15 - 17 April 2019, the Secretary General of the Austro-Arab Chamber of Commerce (AACC) Eng. Mouddar Khouja went on a short trip to Baghdad, the capital of the Republic of Iraq, where he was invited as a guest of honour by Her Excellency Dr. Zekra Alwach, the Mayor of Baghdad, to attend a programme of cultural activities organised under the patronage of the Mayoralty of Baghdad. 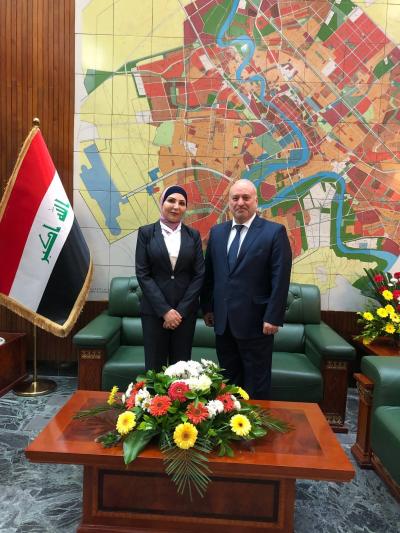 Meeting with the H.E. Dr. Alwach, Mayor of Baghdad (left)

On April 15, the opening of the 11th Baghdad International Flower Festival was celebrated in a memorable and beautiful ceremony. The Festival was attended by more than 1000 international and local visitors, among them representatives on behalf of the Iraqi Prime Minister and other official Iraqi institutions, together with delegates from Kuwait, Iran, Jordan, and many other countries. Eng. Omar Al-Rawi, member of the AACC Board of Directors participated on behalf and in representation of the Mayor of the City of Vienna, H.E. Dr. Michael Ludwig.

On the same day, the AACC Secretary General had a meeting at the Iraqi Ministry of Electricity, where he was received by H.E. Eng. Nafaa Al Hmidawi, Deputy Minister of Transmission and Distribution and H.E. Mr. Aiser Habib Tobia, Deputy Minister for Production Affairs and other high-ranking representatives from the Planing and Studies Office. The Secretary General was briefed about Iraq’s official energy strategy and their plans in the renewable energy sector. 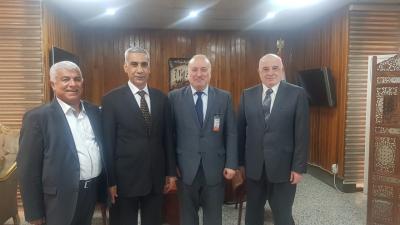 Meeting at the Ministry of Electricity

The Secretary General also visited “The Workshop”, a recently opened convention and incubation centre in the middle of Baghdad, used by embassies, official institutions, entrepreneus and social assocations for trainings, meetings and networking events. This centre was sponsored and implemented upon the initiative of the Iraqi Private Banks League, and designed by Iraqi and Syrian architects.

In the evening, the Eng. Khouja met with H.E. Muzahim Al-Khayat, the newly elected Chair of the Mossul Crisis Council which was formed by the Iraqi Prime Minister in response to the tragic ferry incident in March, and Rector of Nineveh University. Eng. Siood Al-Omari, the newly elected Head of Reconstruction Committee for Mossul, who had recently attended the AACC Experts’ Round Table on the Reconstruction of Mossul in Vienna, was also present at this meeting.

On April 16, the Eng. Al-Rawi and Eng. Khouja were received by H.E. Ali Mohsen Ismail Al-Allaq, the Governor of the Central Bank of Iraq. The Governor gave a brief about the currency situation and fiscal policy of Iraq, informing that Iraq had over 60 billion USD of hard currency reserves, and the highest number of investment amount in the country’s history. The restructuring of the Iraqi currency was another topic discussed during the meeting. The Governor also uttered an invitation to Austrian and foreign bank institutes to come and open branches in Iraq. 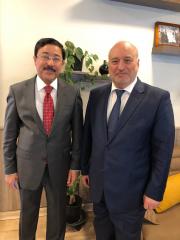 Meeting with the Governor of the Central Bank of Iraq H.E. Mr. Al-Allaq (left)

On the same day, the AACC Secretary General was invited to attend the Official Signing of an Agreement between the City of Baghdad and City of Amman, Jordan. 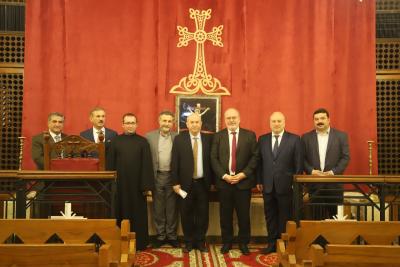 On April 17, the last day of his stay in Baghdad, the AACC Secretary General was invited to attend lectures and presentations at the “House of Wisdom”, the former residence palace of the late King Faisal of Iraq. Among the high-level speakers and panelists were Eng. Omar Al-Rawi, who gave a presentation about waste management strategies of the city of Vienna. As another Austrian-based representative and expert, Eng. Tarafa Baghajati spoke about the successful project renovation of the national library of Sarajevo, executed by the Austrian architect office FCP Fritsch, Chiari & Partner. In the context, Eng. Khouja had the chance to meet with Eng. Thawra Al-Dulaimi, the Director General for Waste and Environmental Issues of the Baghdad Mayoralty, where they spoke about waste management strategies for Iraq in general and the city of Baghdad in particular. Ms. Al-Dulaimi expressed a clear interest in Vienna’s expertise in the field of waste management, and asked for cooperation in finding technology partners from Austria in this regard.

In the afternoon, the AACC Secretary General had a meeting at the Federation of Iraqi Chambers of Commerce, where he was given a warm welcome by H.E. Mr. Mahmoud Al-Aothi, the President of the Nassiriyah Chamber of Commerce, in representation of the Federation’s President H.E. Mr. Abdul Razzaq Al-Zuhairi who was on a business trip in Saudi Arabia. During their constructive talks, the two colleagues discussed ongoing and upcoming projects in Iraq and scopes of cooperation with Austrian companies, such as the planned restauration of the famous Al-Rashidi street, that could invite Austrian civil engineering offices and architects, and other projects. 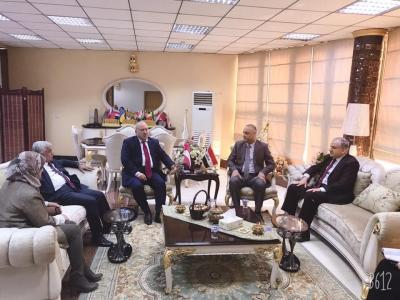 Meeting at the Federation of Iraqi Chamber of Commerce

“The overall situation in the city of Baghdad at present seems stable and secure.  Streets and public areas are being renovated and restored, and the presence of security officers in many areas does not affect the overall peaceful appearance, but rather facilitates a feeling of safety, especially for foreign visitors”, the Eng. Khouja resumed after his trip to Baghdad.