>> Click on the image below to view the video of Beirut Chamber Initiative: << 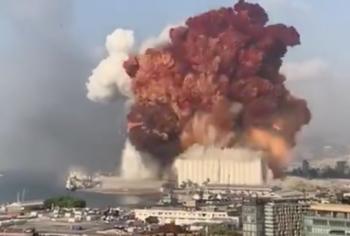 Based on the horror of the disaster that befell Lebanon and its people, due to the catastrophic explosion that struck the port of Beirut and caused severe damage to properties and institutions, the AACC is pleased to support the following two aid initiatives:

The Union of Arab Chambers, together with Arab Chambers, Federations of Arab Chambers & the Arab-Foreign Joint Chambers such as AACC, is calling to support the initiative launched by the Chamber of Beirut and Mount Lebanon, which aims to assist small and medium enterprises affected by the catastrophic explosion.

The initiative targets to restore institutions (shops, restaurants, touristestablishments, etc.) in addition to providing some direct financial aid. The Chamber of Beirut and Mount Lebanon announced that the mechanism to be implemented will be transparent, as all information related to the initiative and all operations, especially the donors, the quantities it provides and how to use it, will be published along with pictures on the Chamber's website.

"Due to the need and suffering in Lebanon since the disaster, I organized a fundraising campaign for Beirut. The donations will benefit two organizations:

One of them is the young Lebanese Mayssam Tannoush, who founded her NGO "Kelna Inta" in 2016 and has been working day and night with her team to help those in need since the accident. I am in contact with her. You can find her courageous and impressive story on my homepage https://verenafalkner.at/hilfe-fuer-beirut/

More information on the fundraising campaign "Beirut-Spenden-Challenge"  is available at the following link: https://verenafalkner.at/die-beirut-spenden-challenge-5-euro-50-tage-5000-euro/

On the other hand, the money goes to the Austrian Red Cross, which supports the Lebanese Red Cross and is represented there by the young Austrian Lisa Taschler. This team is also working tirelessly.

The name of the donor or the company can, if desired, appear on the homepage and the work of the teams on site is documented with photos, see the following link: https://verenafalkner.at/die-spenderfamilie-danke-an-euch-alle/ "